Brought to you by Compleat Angler Dandenong:

The squid fishing has been good in Port Phillip bay over the long weekend, with perfect conditions. Around Mornington EJ Todds Vic Representative Mitch has been catching a heap of squid, with some of the larger ones weighing nearly a kilogram. The new ‘Aussie limited’ colour range of jigs have been super effective, with the ‘Keimura’ and ‘Ruby Prawn’ the standouts at the moment.

Around the southern end of the bay customer Bashir has been catching nice calamari to around 1kg. Red foil Yamashita jigs in size 3.0 were the most effective for him. Customer Chris has also been doing well on the squid around Rye with similar sized models coming in, on a mixture of jigs. Subtle changes in light conditions and water clarity call for changes in jigs colours, but a good jig to start with in clear water is a red foil style jig. Red foil will reflect light well throughout clear water and also give the impression of blood, or an injured target.

Customer James has been catching some quality models to over 1kg out from Tyabb. James has been fishing a few different Yamashita jigs, with the tidal flow dictating whether to use a standard or deep sinking jig. The deep sinking jigs have been claiming some big squid in deeper water out to 9m in depth. As usual along the area green ‘grass whiting’ patterns and also red foil colours have been effective.

Customer Colin has also been fishing around the Tyabb bank in search of some calamari with a nice bag of solid squid coming aboard. Size 3.0 Clicks jigs worked well with the black killer doing most of the damage. The red ‘blood’ line of this jigs stands out in sunlight while the 2 different cloth scale colours really help to attract the squid from a distance away.

Steve has been fishing the top of the port also, with a few nice squid coming from around the Yaringa area and also towards Hastings. Steve has been alternating between natural gold and green base jigs that imitate local baitfish species along with strong contrasting colours like UV whites and solid blacks. Steve also managed a solid cuttlefish during the same trip, which took one of the jigs as it was slow dragged just off the bottom.

While there haven’t been too many reports posted on the kingfish front, there are still some numbers of good fish around. The rip is still holding fish, with some larger fish making their presence felt to anglers still out chasing them. The offshore fishing around Eden has been very good for the kingfish, and if conditions are similar to last year the fish could still hang around for another 6 weeks or so.

Gawaine Blake took a trip up to Eden over the Easter break in search of a few kingies, and he wasn’t disappointed. Gawaine purchased a new Shimano Tranx 301 reel to try on these fish, and knocked them over with it easily. The Tranx is a ‘low profile’ style baitcaster but with serious grunt! Gawaine found most of the fish out along Mowarry Point and jigging was by far the most effective method on these fish, with some nice fish also caught on 2oz weighted soft plastics fished around the reef. Most of the fish that were caught were in the 10 – 13kg mark, which are excellent sized fish.

The bream and flathead fishing around the local and out of town estuaries has been excellent, even with heavy holiday crowds. The cooler water temperatures have got the bream at a comfortable level where they can feed in the shallows without the water being too hot, and the flathead can also ambush these shallow areas too.

Customer Morgan was down in Gippsland with mate Jinsu where they caught some nice bream on lures. Overcast and slightly breezy conditions made for some good fishing, with the fish eager to eat the lures. The most effective lures on the day were the Jackall ‘spytail’ jointed stickbaits. When these lures were fished with sharp twitches and a pause the fish would hit them ferociously.

Customer Shane has been out near Lakes Entrance over the break chasing the big flathead about. Shane ordered in some ‘live prawn’ soft plastics to give a good run on the big flatties and he has put them straight to good use. Shane has been catching good numbers of table flathead on these lures but also fish to nearly 70cm.

Working these live prawns with a sharp-hop-and-fall retrieve has been the best way to get the attention of the larger flathead, and being tear-resistant they seem to last well against the sharp teeth.

Customer Tony has been back to his old tricks, catching some nice bream in the Patto.Tony fished after some light rain using freshwater yabbies and landed 6 nice fish up to 42cm. Among these, 3 fish busted Tony off against the pylons and mussel encrusted poles, and that was on 10lb leader. The Patto will continue to fish well as we get some more rain during Autumn.

It seems that many people have been fishing the inland rivers and lakes over the Easter break, with a few reports from various locations around the state coming through. The Autumn months can fish very well for both Murray cod and yellowbelly, though many people only associate these fish with the warm Summer months. Customer Jacques was up along the Goulburn River just recently where he did a spot of casual bait fishing. Jacques normally fishes the salt out in the bays and offshore, but managed to catch a few small Murray cod and trout cod in the river. Jacques released all of his fish safely back into the river for someone else to catch.

Customer Emilio has also been catching a few cod. Emilio has been fishing the Murray itself, around Cohuna. Emilio has been getting out on the water early, and suggests to start your fishing around 6am as these cod are most active around then. Emilio has been switching between bardi grubs and also freshwater yabbies to catch his fish, with a small amount of berley helping to get the activity started.

Back towards Mulwala the lake has been fishing well. While the Easter ski and wake crowds have been tough to get around during the heat of the day, the fishing around low light has been good. There have been numerous cod over 1m caught by anglers casting swimbaits and surface lures around, although this fishing isn’t for the easily bored. It can take 500 casts in a session to strike gold on these fish, and sometimes after all this casting you may not land a fish.

Staff member Dylan tangled with monster cod over the Easter weekend at Mulwala, only to have it earn it’s freedom early as it broke 80lb leader on the snags. The big fish ate a big lure (25cm long) so it pays to go big when looking for a big cod!

Customer Long also managed a fish in around the Bundalong section of the lake to land some nice yellowbelly to around 2kg on medium sized freshwater yabbies.

Staff member Dylan and mate Daniel took a long drive over the Easter weekend up to northern NSW in search of big cod at Copeton dam. While the Easter crowds were crazy with jetskiis, wakeboats and family cruisers all over the place, the guys worked a lot of the lake in search of a fish. Daniel managed a nice yellowbelly on a swimbait slow rolled around a pile of submerged rocks which at least got them off the board. 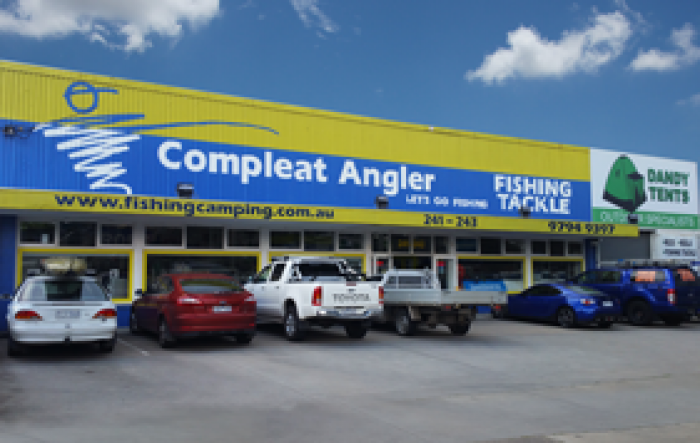 Join Now!
Find a Compleat Angler store near you

Send this to a friend